April 3, 1937 – April 6, 2022
A bright spark left our world when Jeannette Udell – Foster died on Wednesday, April 6, 2022 at the Meaford Hospital. She was surrounded by family who loved her and cards marking her 85th birthday. 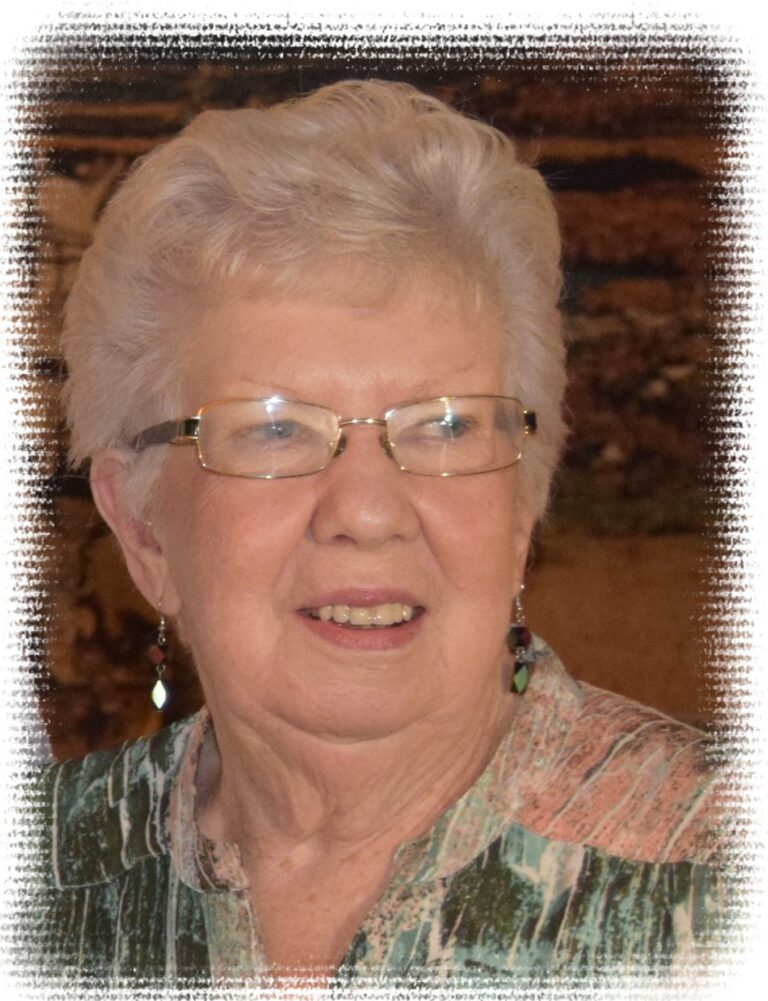 Life of the party, gregarious, astute business woman, terrific sister, aunt, friend – all describe her.  Most of all she was just plain fun to be around, lighting up a room with her smile and her ready laugh. Jeannette made everyone feel special – young and old alike.  She lived a full life, accomplished much and made life-long friends everywhere she lived.

Remembered fondly by the Foster family: Terry, Wayne and Larry (Brenda) Foster, Sharon Dinsmore (Colin) and was a loving step-grandma to their children. Among her many friends who will miss her, Karol, Ina, Wendy, Joan and Shirley will be remembered for helping her so much in recent months.

Jeannette was predeceased by two husbands, Jack Udell and Jim Foster.  She was married to Jack for almost 40 years and had a life with Jim for 15 years.

Born in Rocklyn, Jeannette was the beloved youngest daughter of Stewart and Aulda (nee Kenny) Falls. As the much younger sister, she might have been indulged but was often in trouble for pranks at home and at school. Outgoing and social from a young age, people were always drawn to her.

Music was in her soul.  Her mother taught piano but didn’t have time to teach Jeannette – that didn’t matter. She was a natural talent.  Gatherings of family and friends at the Falls farm always ended up around the piano as Jeannette played and sang the old standards into the night.  Didn’t know all the words?   No problem – just sing the ones you know again!  Family folklore has Jeannette singing and playing the ukulele for 24 hours straight at a marina on the US side of Lake Ontario, where she and Jack would cruise on weekends. Her fingers were bleeding and her voice cracking but she was having fun with her friends, blowing off steam after a busy week.

Her early life with Jack was exciting and her energy seemed boundless.  Jeannette never cared much about the size of her house or most material things but she and Jack always had all the fun toys – a cottage, sporty cars, fast boats, snow mobiles when they first were available.

She played hard but worked harder.  She was a skilled hairdresser – but the core of her being and her success – was as a people person.  She went the extra mile for her staff and customers, so many of whom became fast friends. She owned highly successful hairdressing businesses in Oakville and Meaford and, in between, built a very busy marina operation on Go Home Lake with Jack.  All meant very long hours, particularly the marina.

They were burnt out after seven years at the marina so decided to semi-retire and make a home in Meaford.  They built a house, planted a few apple trees and Jeannette worked for other hairdressers.  The first house on the sideroad was purpose-built for parties – and there were many, often with a local band supplying the music. Jeannette and Jack hosted celebrations of milestone anniversaries and New Years Eve, a wedding and even a pig roast when a friend won dinner in a fundraiser. No one can forget a party on ‘Lonesome Sideroad’.

But before long, their ‘retirement’ became dull and Fort McMurray beckoned.  Jeannette loved the wild west atmosphere and excitement of the frontier town in the early days of tar sands development.

After a few years, family and friends drew them back to Meaford where she eventually bought the Golden Comb. Pretty soon it seemed everyone in town was coming through those doors – even some men when she added a special chair.  Former employees praised her as a great and generous boss who made work a pleasure. Jeannette’s shop was a place where people came to have their hair done but kept coming back for the fun… and maybe a little gossip.

She also made time for the community – appearing in numerous plays at the Rocklyn Hall or playing the kazoo in the Scarecrow parade.

Jeannette started to laugh again once she started to see Jim. They had been friends for years and got together after they both lost their spouses.   For 15 years, their life was filled with dancing through the night at local halls, curling in spiels all over Ontario, playing cards for hours, visits with family and friends and taking long driving trips (who drives to Alaska!).  Jeannette opened her life and her heart to Jim’s family and they returned the affection.

She lived large and loved well, bringing fun and joy to so many, particularly her family.  She never wanted to slow down even when health issues meant she should. She could be frustratingly stubborn about that.  She left an indelible mark on everyone who knew her. She will be missed and remembered as larger than life by so many.

The family thanks the staff, nurses and doctors who cared for her and made her last days comfortable at the Meaford Hospital.

Cremation has taken place and a Celebration of Jeannette’s Life will be held at the Meaford Hall on Saturday, June 25, 2022 from 2 until 4 p.m.

As your expression of sympathy, donations to the Meaford Hospital Foundation, Diabetes Canada or a charity of your choice would be appreciated and may be made through the Ferguson Funeral Home, 48 Boucher St. E., Meaford, ON   N4L 1B9 to whom arrangements have been entrusted.   www.fergusonfuneralhomes.ca.

Celebration of Jeannette’s Life will be held at the Meaford Hall on Saturday, June 25, 2022 from 2 until 4 p.m.


Donations: Meaford Hospital Foundation, Diabetes Canada or a charity of your choice