A gregarious and kind man, Ellwood Falls died peacefully in his sleep on Monday, October 17, 2022 at the Beechwood Manor in Waterloo surrounded by family. 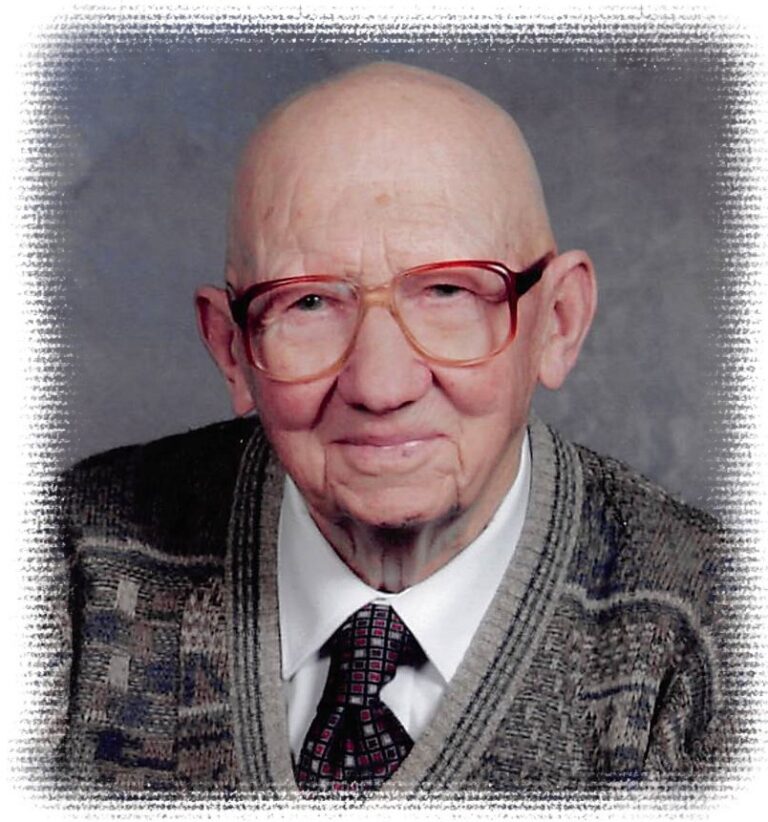 Ellwood was predeceased by his wife and soul mate Gwen (nee Burnside). He was a loving father to Sharon Falls (late Bing), Rhonda Bott (Dale) and Jeannette Platt (Tom) and proud ‘Poppa’ to Justin Haines, Jenna Boss (Jon) and Lauren Bott (Jeremy).  He will be sadly missed by sister Audrey Watson (late Dave) and was predeceased by sisters Mylrea Gilchrist (late Hugh) and Jeannette Foster (late Jim).  Many nieces and nephews remember him fondly.

Ellwood was born on October 7, 1928 just outside Rocklyn, the second child of Stuart and Aulda Falls.  He grew up with three sisters, alternately teasing and looking after them.  Audrey remembers the many cold trips Ellwood made with the horse and cutter to pick her up at school in Meaford.

Because of the times, a sick father and demand for food production during the war, he left school after elementary school.  Despite an early end to formal education, he never lost his curiosity about events and people beyond his community.  Farming was in his blood and he was unlikely to have chosen another path anyway.  He eventually became the third generation of Falls to own the farm, raising Hereford cattle.  A proud moment came when he won the gold medal for judging beef cattle at the Royal Winter Fair in 1954.   Later, he became a sought-after judge at regional fall fairs.

Ellwood grew up loving music and hardly missed a dance in the small halls dotting the area.  At one such evening in Markdale, he asked Gwen to dance and impressed her with his waltzing.  He apparently never waltzed again.  But that didn’t matter… they danced together most Saturday nights for almost 60 years.  Theirs was a wonderful marriage of two kind and caring people, deeply committed to their family and community.

Ellwood and Gwen’s home was open to everyone – especially when it came to keeping the ‘family’ in the family farm.  His sisters regularly came ‘home’ to visit, bringing their families and friends.  Later his daughters did the same, filling the house with laughter and music.  Ellwood loved nothing better than to have everyone gathered around the piano singing the old standards with his sister Jeannette pounding the keys.

He understood that dedicated volunteers form the heart and soul of thriving small communities – and always gave so much of his time.  Ellwood served on the Rocklyn Arena Board and Agriculture Society and was part of a group that got a new arena built. Later he worked hard for the Meaford Rotary Club.  He was an active member of the Temple Hill United Church and later the Meaford United Church.

Sports were also important to Ellwood.  Hockey and baseball were his sports. In his younger years, curling was a constant and he later took up golf in his retirement.  A shelf full of trophies attested to his skill.   Curling was a favorite – a great blend of friendly competition and social time. The social time started even before the drive to the bonspiel.  In addition, Ellwood and Gwen skated well into their 80’s – and could be found tearing up the ice at the Meaford arena, often passing much younger people.

His social nature must have made working on his own difficult. But Ellwood made up for lost time given any opportunity.  He could and would talk to anyone, make connections and invite them to visit Meaford. He made friends everywhere he went and always had people dropping in to visit.

He wisely knew when it was time to quit farming and, when he was 62, Ellwood and Gwen built a new home in Meaford.  He leapt into retirement life with typical enthusiasm, taking up golfing and joining Rotary, getting involved in every event.  He received the Paul Harris award for his volunteering and continued to make weekly food deliveries in support of the school breakfast program into his late 80s.  Retirement also meant time to travel more and they made several trips throughout Europe with a group of old and new friends.  True to his nature, he talked to a man he met in Austria only to find out he had once lived in Meaford.

When Gwen became ill, Ellwood never complained, never wavered in his commitment to her – just looked after her at home longer than he probably should have. Her death was a blow but he carried on and continued to welcome a steady stream of family and friends into his home – until Covid made that difficult.

He never wanted to leave Meaford, but needed more help than could be found locally.  With most of his family in Waterloo, a decision was made.  True to his nature, he made new friends in his new home.

Ellwood spoke often of how lucky he was in his life.  Those who knew him felt lucky to know such a kind, considerate and appreciative man, full of stories but someone who genuinely wanted to know about you.

The family wants to thank the caring staff at Beechwood Manor but most especially his special friend Bob Feltrin whose support, friendship and many road trips helped Ellwood stay in his home for so long.

A public funeral service will be conducted at the Meaford United Church Friday, October 21 2022 at 11:00 o’clock with a reception following in the galleries at the Meaford Hall, all are welcome to come to share stories and refreshments.  A private service of committal and interment will take place at Lakeview Cemetery in Meaford.

As your expression of sympathy, donations to the Meaford Hospital Foundation or the Meaford United Church (Cheques Only Please) would be appreciated and may be made through the Ferguson Funeral Home, 48 Boucher St. E., Meaford, ON   N4L 1B9 to whom arrangements have been entrusted.   www.fergusonfuneralhomes.ca

Friday, October 21, 2022 11:00 AM
Service at Meaford United Church with a reception following at the Meaford Hall.

Make a donation in memory of Ellwood Kenny Falls