Graham’s life ended suddenly and unexpectedly on Tuesday, August 2, 2022. He died doing what he loved, tending the grape vines on his daughter’s property. 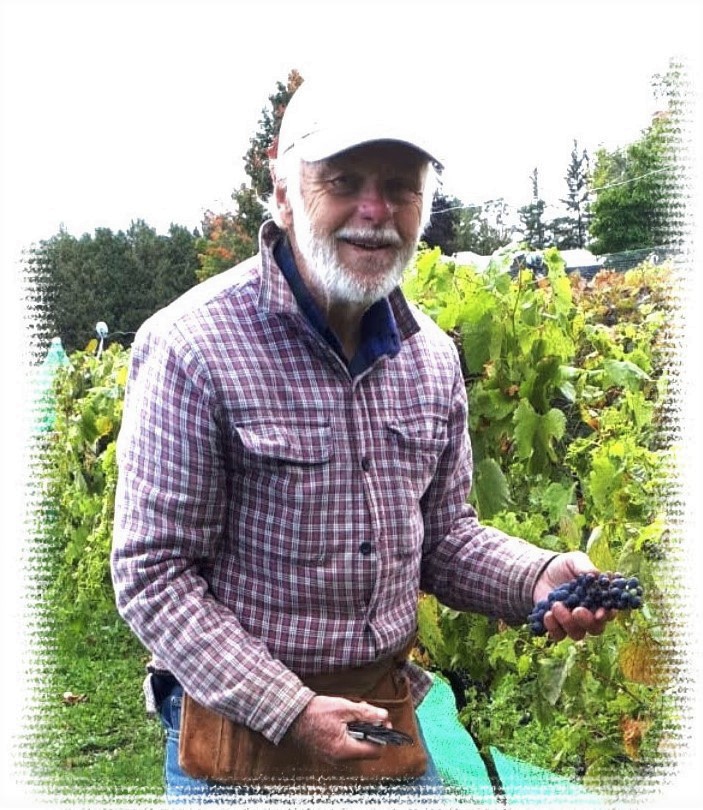 Born in Cheltenham, Glos. England in 1935, Graham emigrated to Canada in 1956. He arrived in Windsor with one suitcase, a possible employer’s name, $90.00 and a quest for a better life. He defined his emigration as a ‘turning the corner event’ and loved to quote Robert Frost “I took the road less travelled and that made all the difference”.

His fiancee, Marlene, followed 4 months later. They married and began their lives in Canada.  Marlene’s parents and four siblings followed shortly after, destination Toronto. Thanks to Graham, all have flourished in Canada and thanked him for his adventurous spirit.

His Canadian career began in mechanical engineering in Windsor, Ontario, moved to Indiana, USA for five years, and eventually Burlington, Ontario. A professor at Mohawk college, he loved to teach and expand other people’s knowledge. His volunteerism as a scout leader brought back fond memories as a young man in Cheltenham and enhanced his strong values of loyalty, commitment and the wolf cub’s promise to “be prepared”.

An insatiable curiosity to learn and a desire to farm began a new life experience as a beekeeper. He became enthralled in the beauty and the science of the life of the bee and when an opportunity arose to purchase a commercial operation in the Beaver Valley in 1977 he moved to Thornbury. They tackled another adventure together.

During his beekeeping career he was President of the Ontario BeeKeepers Association. He exhibited in the Royal Winter Fair for several years and won many ribbons. He was an advocate for apple pollination, leaf cutter bees and spent many years working with the University of Guelph in new research. His belief of small town and community made him an annual participant in the Beaver Valley Fall Fair with an observation beehive.

Running a commercial apiary kept him busy, however Graham also made the time to be involved with the Chamber of Commerce, the local Toastmasters club serving as Governor for a number of years, and the Rotary.

He and Marlene enjoyed a number of unique travels around the world, with one of the highlights being an adventure canoe trip down the Yukon River with friends. He went with a group to Haiti to build homes and distribute solar ovens. He traveled to Cuba and Costa Rica on a beekeeping working holiday.

Although Graham was always working at something, he always made time to sit down and have a chat. He became hard of hearing which took him away from meetings and public affairs.  After beekeeping, he put all his energy into his garden and vineyard, brewing up new ideas and configurations for plantings. Always with a project on the go, Graham did things with enthusiasm and ethics. He liked to question and research projects he set out to do. He was astute with the computer for research and enjoyed corresponding with his grandchildren.

Graham was proud of his family. He will be so missed by his wife Marlene, their daughters Lori (Shields; Dave), Keri (Lockhart; Al) and Jan (Perry; Rob); their seven grandchildren Heather (Porter; Matt), Scott, Drew, Tyson, Jared, Megan and Emma; and great-granddaughter Opal.

A Come and Go Celebration of Graham’s Life will be held at their home in his beloved garden at 200 Russell St. E., Clarksburg, on Wednesday, August 24th from 2 until 4 p.m.

As your expression of sympathy, donations to the David Suzuki Foundation would be appreciated and may be made through the Ferguson Funeral Home, 48 Boucher St. E., Meaford, ON   N4L 1B9 to whom arrangements have been entrusted.   www.fergusonfuneralhomes.ca

A Come and Go Celebration of Graham’s Life will be held on Wednesday, August 24, 2022 at their home in his beloved garden at 200 Russell St. E., Clarksburg from 2 until 4 p.m.

Make a donation in memory of Graham Martin Roberts